Could Snapchat, the red-hot messaging service that is reportedly working on a new funding round that will value the company at $19 billion or more, be getting some of that funding from billionaire tech investor Prince Alwaleed bin Talal? It sure looks that way: the Saudi prince’s investment company put out a statement on the weekend saying that bin Talal met with Snapchat CEO Evan Spiegel and the two talked about a “potential business co-operation” between their respective companies.

Prince Alwaleed — whose full name is Alwaleed bin Talal bin Abdulaziz al Saud — is a member of the extended Saudi royal family, and a veteran technology investor who has a stake in companies like Twitter, and a track record of investing early in companies like Apple. As a number of sources have also pointed out, the prince recently sold his stake in News Corp. and is said to be looking for a new-media entity to invest in.

Alwaleed’s interest may also be fuelled by the amount of usage that Snapchat gets in his home county. Many social-media apps like Twitter are popular in Saudi Arabia — in part because they give people a way to talk about the country’s current political regime and its various restrictions on free speech and other human-rights issues — but for Snapchat in particular Saudi Arabia is one of the largest non-U.S. markets in terms of usage. 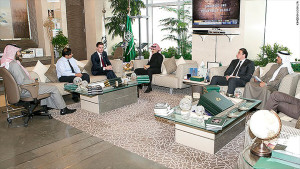 Snapchat has been growing rapidly over the past year, and now has more than 100 million users. And while the service started as an “ephemeral messaging” app that automatically deleted messages after a certain amount of time, it has expanded its horizons beyond just that market by launching a number of new features — including a new service called Discover, which provides short video clips and other content from media partners like CNN and BuzzFeed.

Discover is still relatively new, but media-industry insiders say the number of unique visitors and engagement levels the service is driving are huge: Digiday quoted one as saying the traffic numbers were “f***ing incredible.”. And in a recent piece about how new apps like Snapchat and Vessel are trying to compete with YouTube to lure content creators, the WSJ said that the Food Network saw more than 10 million unique visitors to its platform in 12 days after it joined the Discover service.

The platform’s popular “Snapchat Stories” are also driving massive numbers of visitors, as my colleague Carmel DeAmicis recently reported. Numbers like that are making many media watchers sit up and pay attention, so it’s not surprising that they would have caught the eye of a prominent media-industry investor like Prince Alwaleed. Whether he eventually pulls the trigger and makes an investment in the company remains to be seen.