Traditional media can still generate some political heat, it seems, at least when it’s aided and abetted by the lightning-fast response time of the political blogosphere. The latest issue of the New Yorker magazine only hit newsstands this morning, but the cover image has already stirred up a firestorm of protest and indignation on the Internet, after it was circulated on various blogs and political websites yesterday. The drawing (by Barry Blitt) shows Barack Obama and his wife Michelle in the Oval Office doing a celebratory “fist bump.” Barack is dressed as a Muslim, while Michelle has an Afro and is carrying a sub-machine gun. There is a painting of Osama Bin Laden on the wall and an American flag burning in the fireplace. 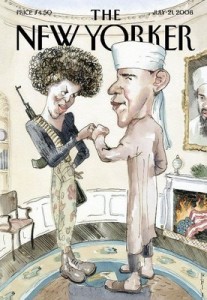 The cover title is The Politics of Fear (although the title doesn’t appear on the actual cover of the magazine). New Yorker publisher David Remnick said in an interview with the Huffington Post’s Rachel Sklar that the cover was meant to be a satire of all the Republican fear-mongering about the Democratic presidential candidate, but plenty of Obama supporters didn’t see the humour. Within hours of an article about the cover being posted at the HuffPo, there were more than 800 comments from outraged readers. By this morning, there were more than 3,000 comments. On the Daily Kos blog, one of the leading left-wing blogs run by Markos “Kos” Moulitsas, a post about the cover had over 2,000 comments by this morning, many of them taking issue with what they saw as a conservative attack on Obama and his campaign. On the Politico story about the cover, there were 1,827 comments.

When asked on Sunday via email whether in retrospect he regretted doing the drawing given the outcry, the artist replied: “Retrospect? Outcry? The magazine just came out ten minutes ago. At least give me a few days to decide whether to regret it or not.” You’d better hurry up, Barry — the political blogosphere waits for no man.