Although it often gets dismissed as a boring, Web 1.0 retailer at heart, Amazon has been doing a lot more innovative things than it gets credit for — including its very Web 2.0-ish S3 distributed storage service (which more startups should make use of) and its EC2 virtual server offering. And now, Amazon has jumped into the wiki business as well, with the “Amapedia,” a wiki devoted to products, which was discovered by the resourceful Rogers Cadenhead.

It’s still so new that there’s very little content in the Amapedia, but it has a very clean interface — arguably even cleaner and easier to follow than Wikipedia’s. There’s a featured product on the landing page, and then a big “tag cloud” of keywords. When you click on something like “camera,” you get taken to a main page with a description of the product, and on the left-hand side there is a breakdown of the cameras in various sub-categories. 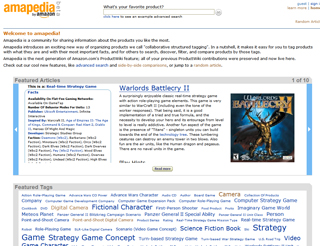 Obviously, there are going to be issues with something like Amapedia, as there are with Wikipedia, which has been involved in all sorts of scandals that have to do with accuracy, vandalism, and accusations of elitism. As a small example, the Amapedia entry for camera says the word is “Italian for room.” Close, but no cigar. Camera is actually Latin for room, although Italian is derived from Latin.

With the Microsoft/Wikipedia kerfuffle so fresh, I wonder how long before companies start paying people to make entries in Amapedia (I give it about a month). The new service is apparently an expansion of the “product wikis” that Amazon launched awhile back, and the info from them has already been incorporated into Amapedia, according to Read/Write Web.

Rogers Cadenhead, meanwhile — who says that in honour of having discovered Amapedia first, he should be made king of this new fiefdom and addressed as “Amazimbo” — wonders whether Amazon will compensate those who contribute the most to its entries, with a discount coupon or some variation thereon. Not a bad idea. And does it matter that a product-oriented wiki already exists?